February 27, 2017 – “A STANDING ROOM ONLY audience for “Exoticism in Music” concert at Carmel’s Sunset Center on Sunday was all the more conspicuous by who wasn’t there than by who was.

Music director Farkhad Khudyev just took third prize at the Georg Solti International Conducting Competition in Germany, and watching his performance on the podium of Rimsky-Korsakov’s Scheherazade showed why. His style and instincts are unique among conductors I have observed; with body language, subtle gestures and facial expressions he forces his musicians to focus on his artistic interpretation. A fluttering of the fingers of his left hand, a slight shrug of one shoulder, a broad smile and even a stop of all motion on the podium signal an example that inspires and lifts his musicians. He makes them dial in and bear responsibility equally.

As I write this, the music of Scheherazade continues to play in my head, and the way Khudyev shaped and molded his orchestra will long remain vivid in my memory.” 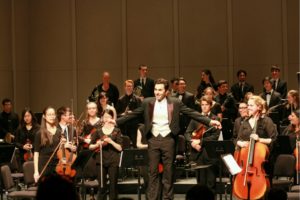 “We have to marvel at the fine work music Director Farkhad Khudyey has achieved. Some people may be under the impression that his artistry is somehow connected to the manner in which he waves his little stick during a concert, but musicians know that what really happens on stage during a concert has less to do with “stick technique” than what happens in rehearsal. This is where the true mastery begins and ends. From the selection of appropriate music to working out all the details of blending the various sections of the orchestra — this is where the magic happens, and Farkhad Khudyev is obviously very good at it. We are fortunate to have him in our community.” 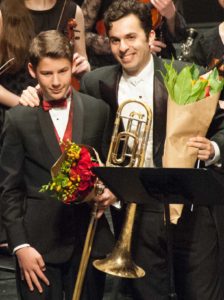