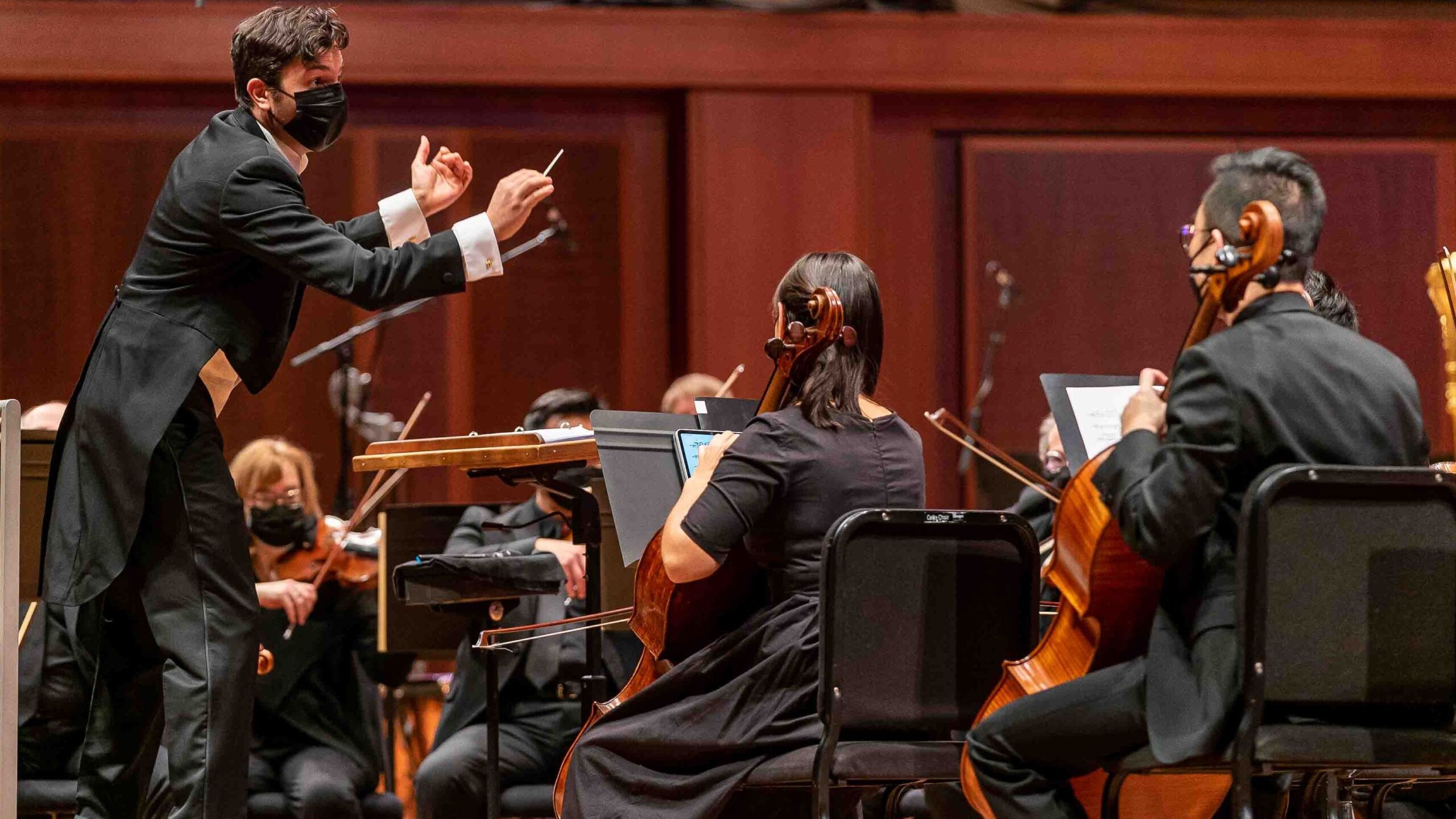 January 19th, 2022 – “This year it was played so well that the players themselves were as exhilarated as the audience. The reason was a young Azerbaijani (by way of Austin, TX) phenomenon named Farkhad Khudyev who can make the stale caviar and flat champagne of Austro-Hungarian absolutism appetizing again.” – Seattle Post Alley 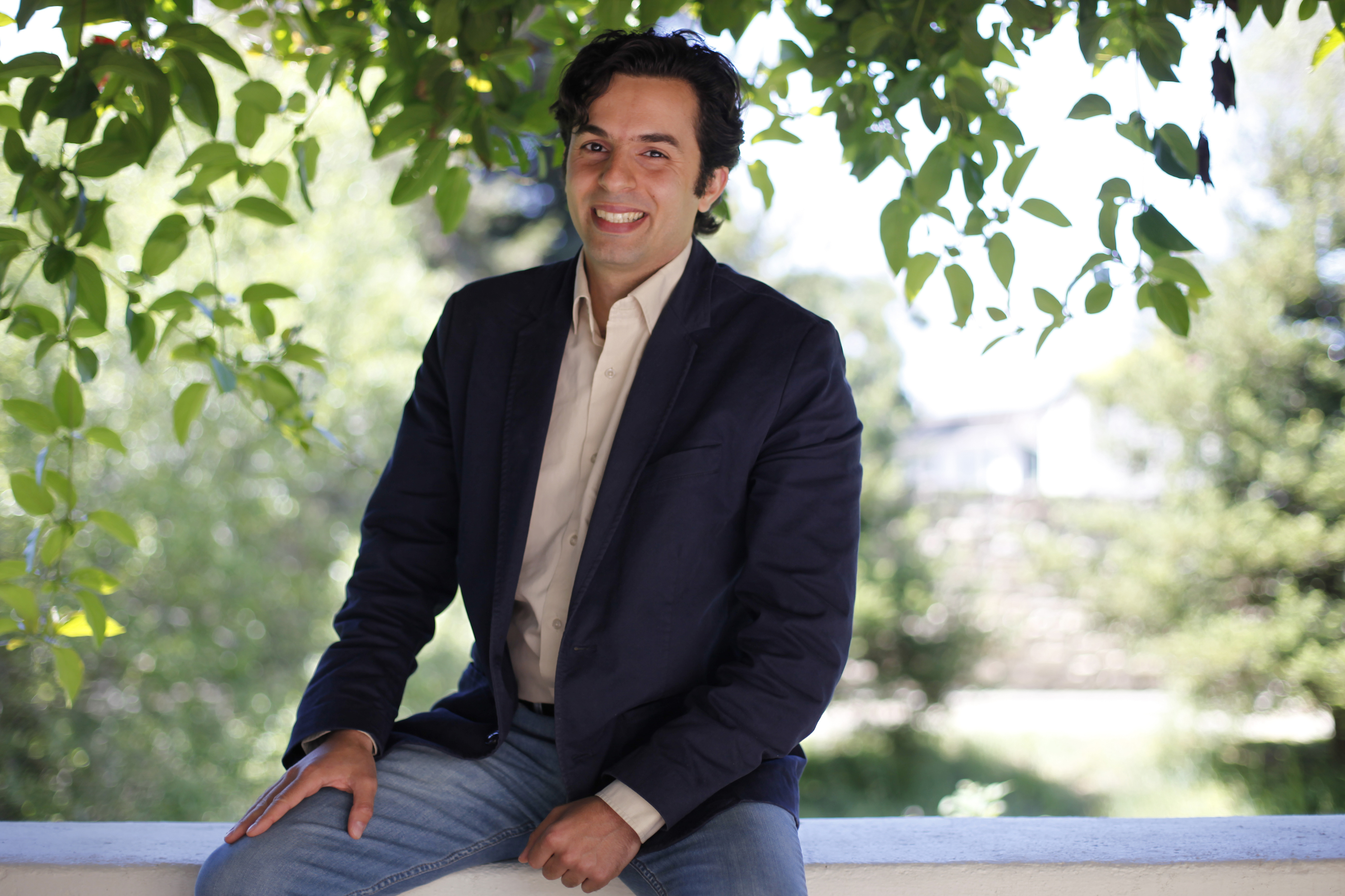 “The magnetism of indicated expressions was persuasive… This performance was characterized by the beauty of sound, enchanting legati, virtuosity, and perfection.”

November 20th, 2019 – “Watching Khudyev conduct these pieces was a delightful experience.  Maestro’s elegant conducting gestures and floating soft hands led the orchestra skillfully, pinpointing delicate subtleties and fine nuances to orchestra musicians.  The magnetism of indicated expressions was persuasive… This performance was characterized by the beauty of sound, enchanting legati, virtuosity, and perfection.” […] 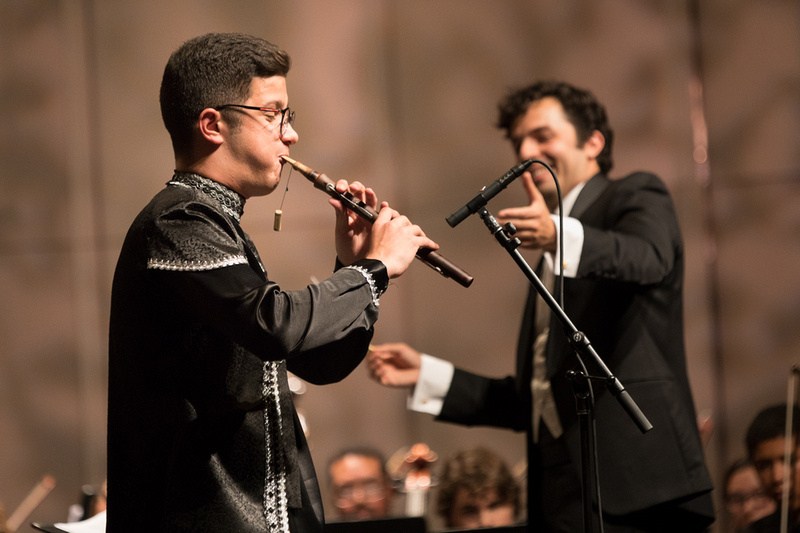 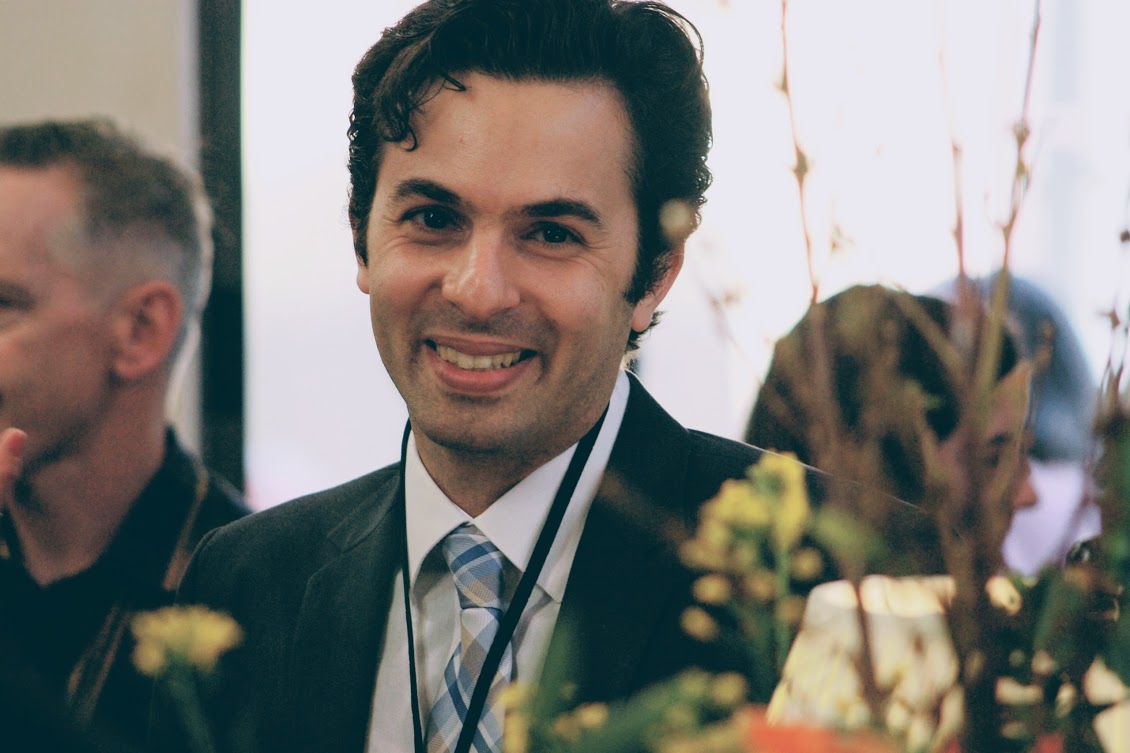 “Our good fortune to have such an inspiring young conductor as Maestro Farkhad Khudyev. Amen!”

May 14th, 2018 – “One of the most successful works on the afternoon’s program was a performance of Samuel Barber’s Overture to “The School for Scandal.” This difficult score was brilliantly rendered with dazzling performances by the strings, winds, brass and percussion sections. Also outstanding was a performance of “Romance” (from musical illustrations “Snowstorm) by […] 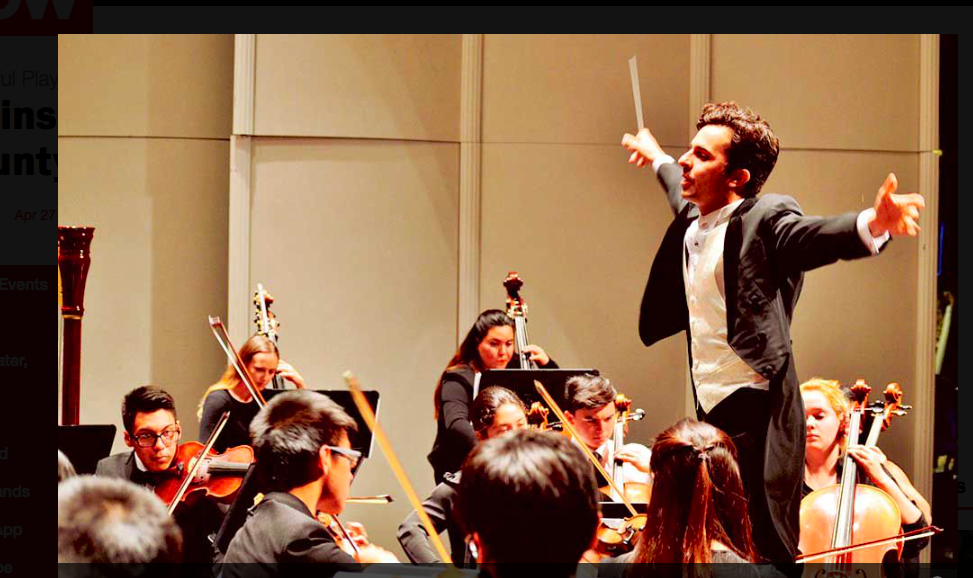 April 27th, 2017 – “Things happen in the world and with everything changing every day, the music gives us the roots of virtue that let us communicate and go on and do beautiful things in the world. That’s why I’m here and that’s why we’re having this concert.” Full Article: http://www.montereycountyweekly.com 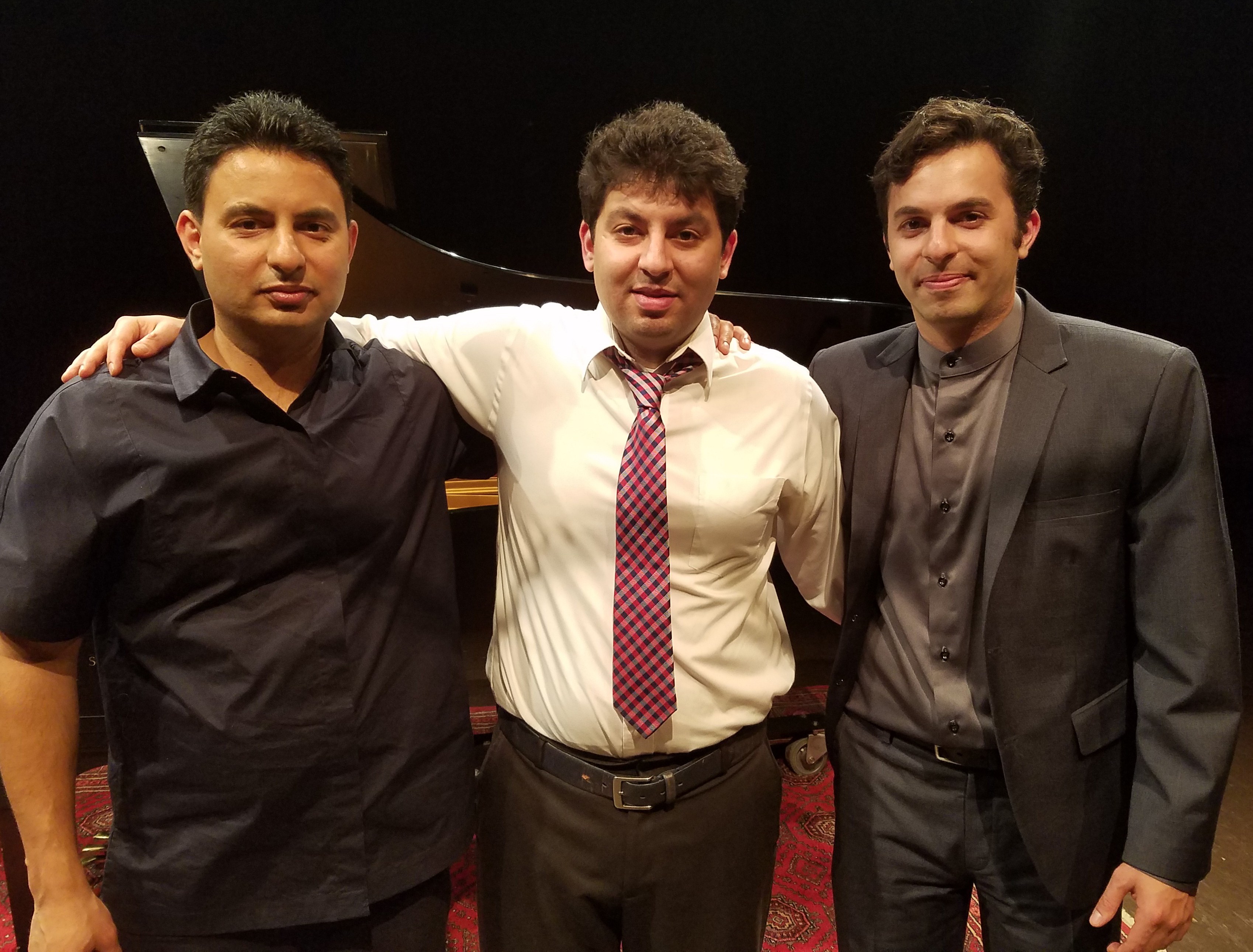 March 23rd, 2017 – “So sensational was this finale, and the entire program, that the audience simply refused to leave the Hidden Valley theater, preferring to talk up the artists and heap raves upon them.” Full review: http://performingartsmontereybay.com 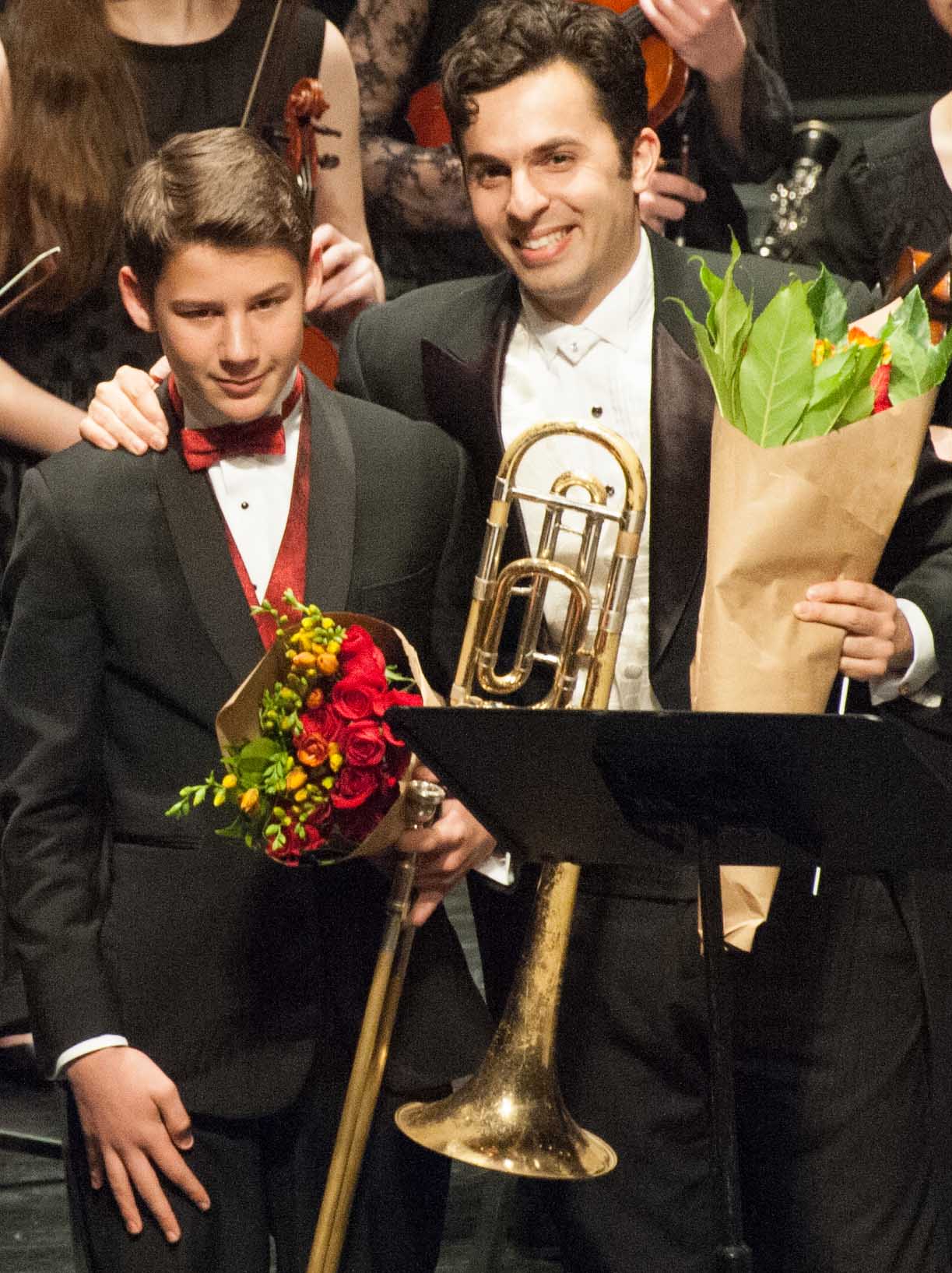 February 27, 2017 – “A STANDING ROOM ONLY audience for “Exoticism in Music” concert at Carmel’s Sunset Center on Sunday was all the more conspicuous by who wasn’t there than by who was. Music director Farkhad Khudyev just took third prize at the Georg Solti International Conducting Competition in Germany, and watching his performance on the podium of […] 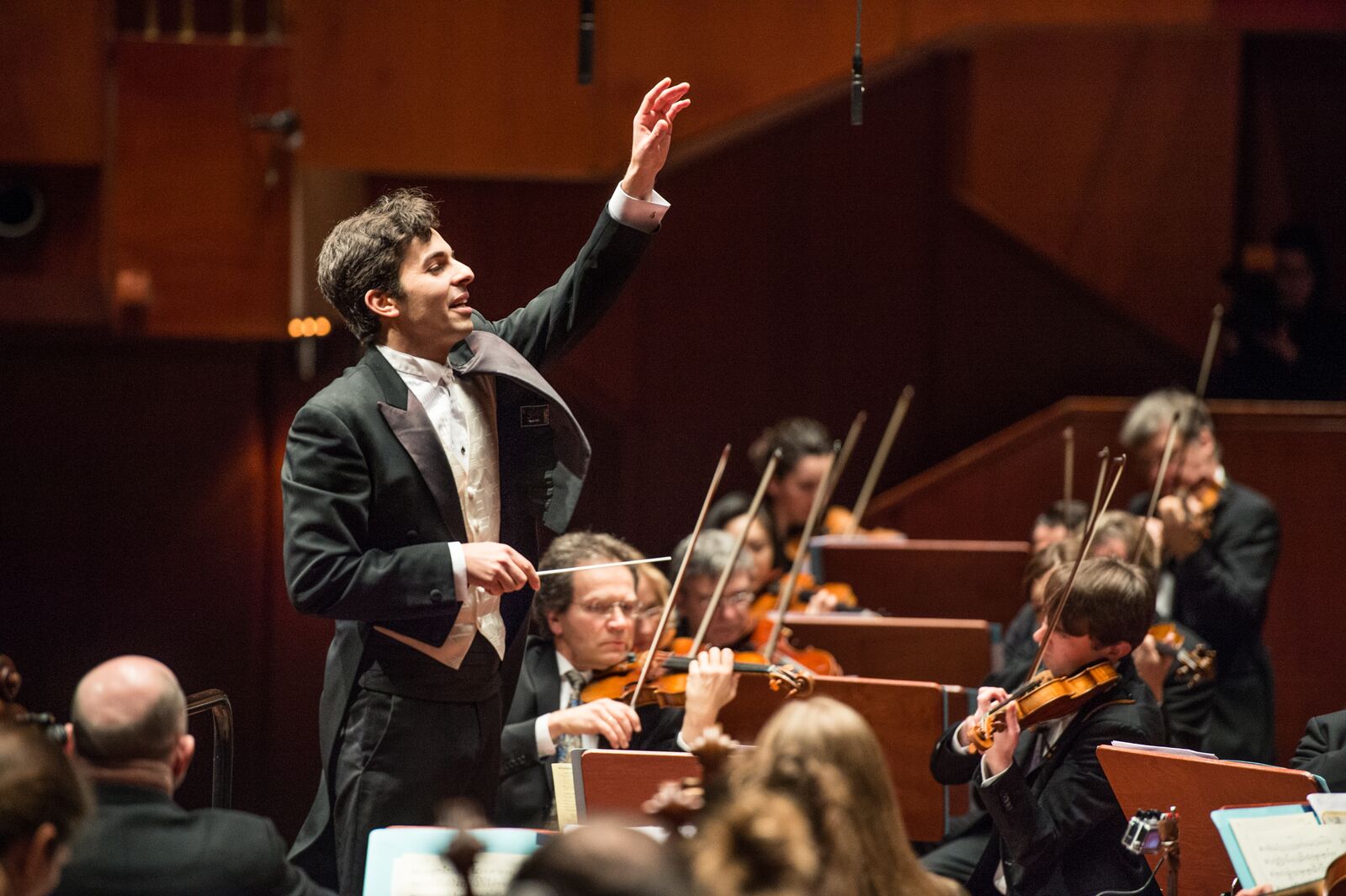 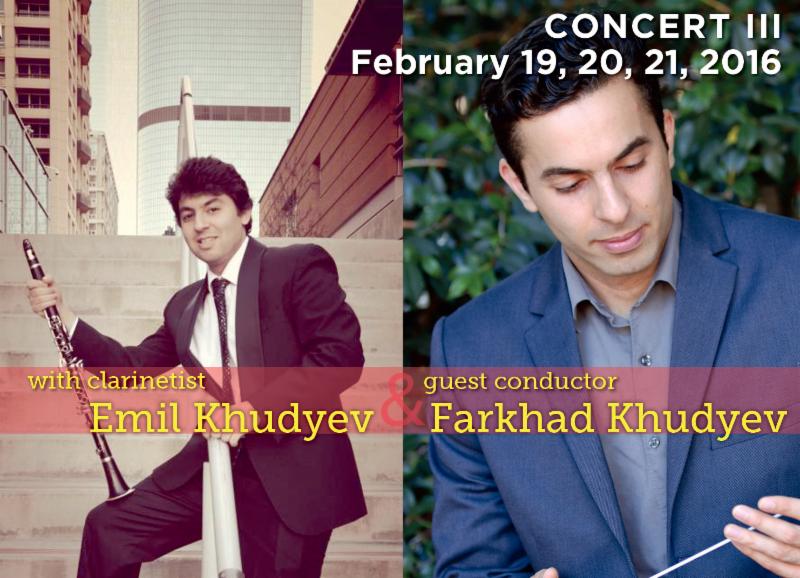 This much-anticipated February program opened with the short, powerful and astounding world premiere of Khudyev’s “The Sounds of Eternity.” Both an intimate musical self-portrait and an unflinching reflection of the human condition, this composition weaves together elements of Khudyev’s childhood growing up in Central Asia’s Turkmenistan with a transcendental message about finding joy in the […] 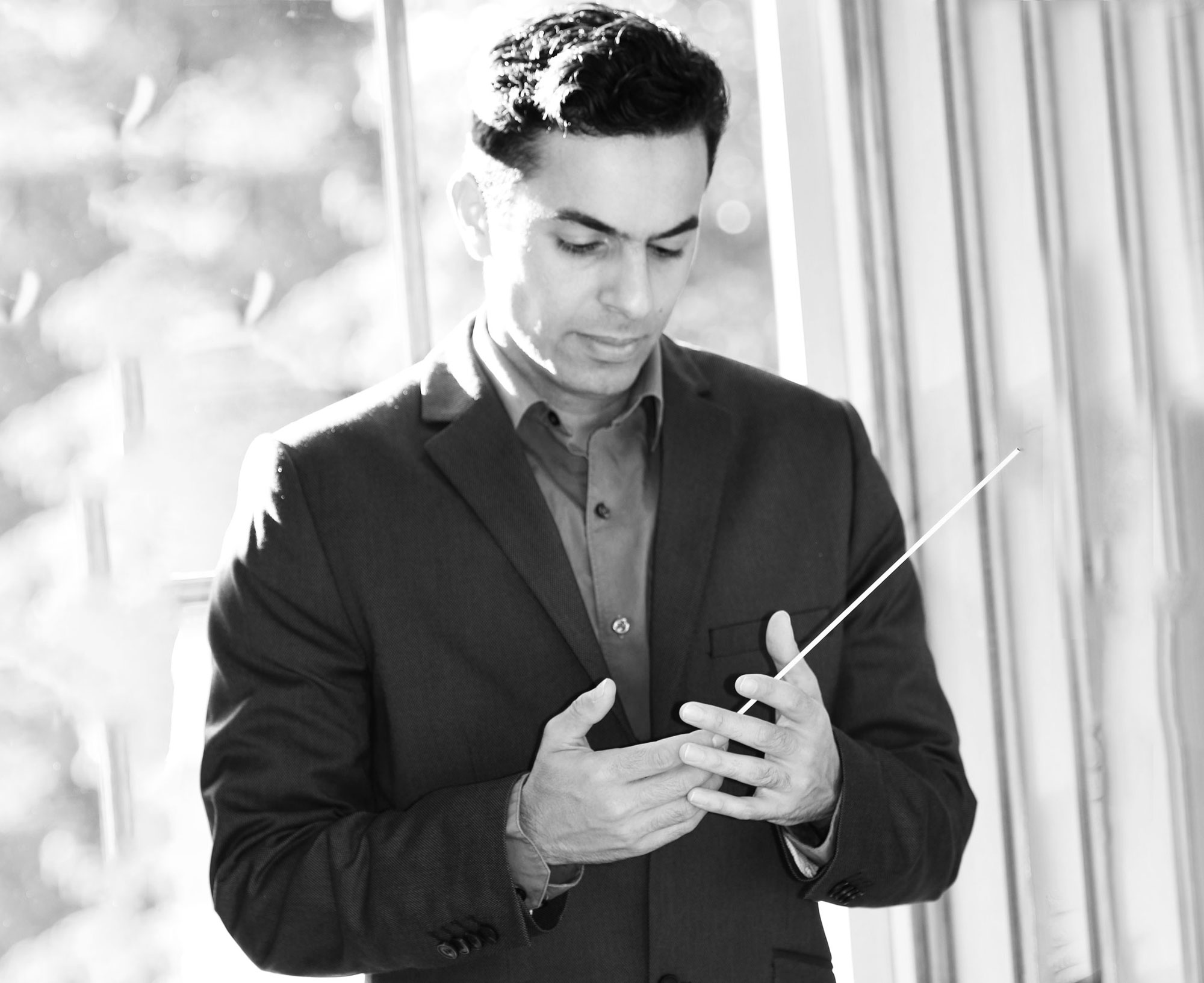 “The magician on the podium…”

The program concluded with George Enescu’s greatest hit, the irresistible Romanian Rhapsody No. 1, a tour de force for orchestra that’s littered with cameo solos spotlighting individual players. The orchestra sounded in peak condition and got the audience acclaim it deserved. And so did Khudyev, the magician on the podium. Full Article: http://performingartsmontereybay.com 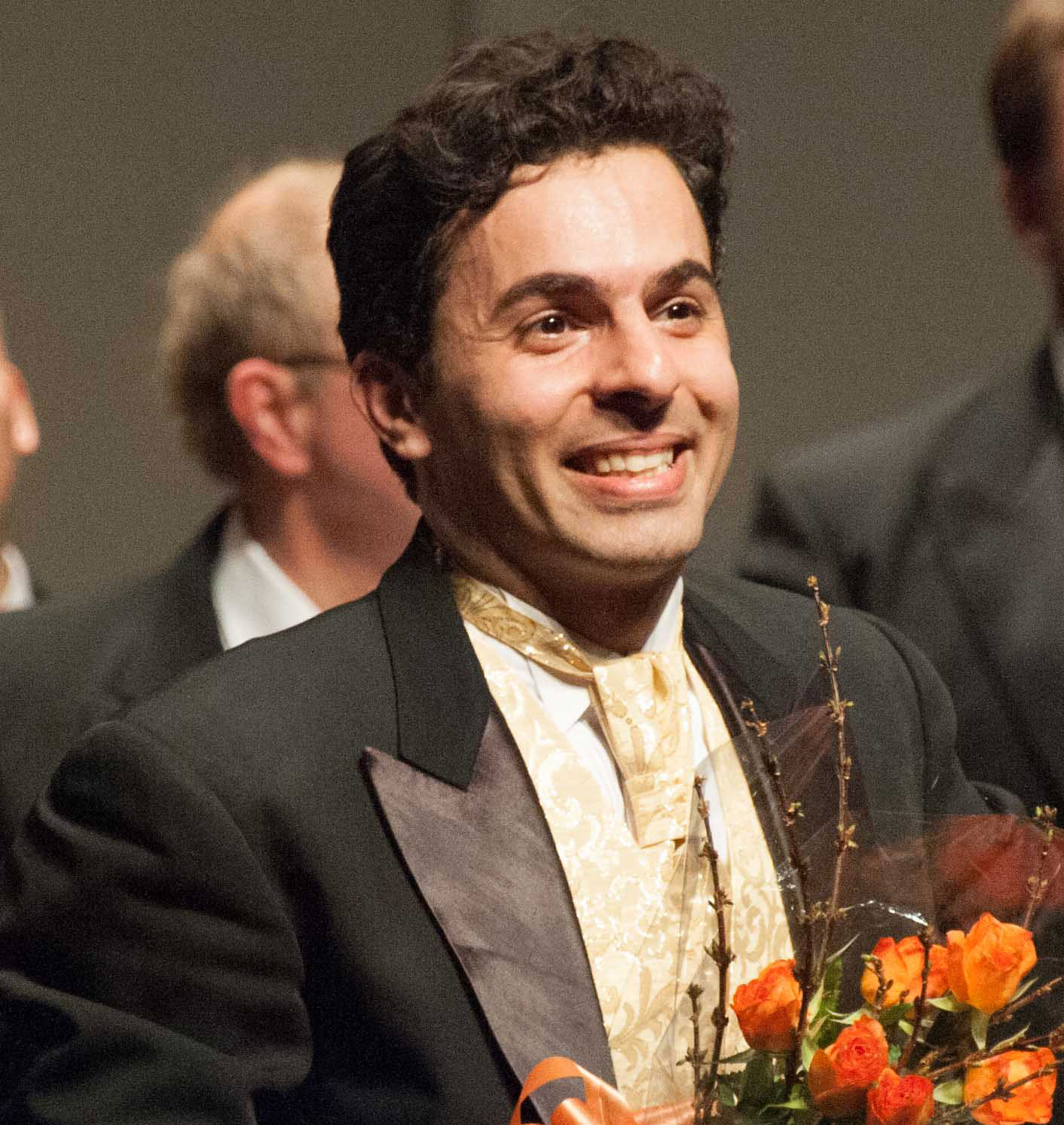 “Music Director, Farkhad Khudyev, a source of inspiration and encouragement…”

“We must give thanks to YMM’s Music Director/Conductor (and fine violinist), Farkhad Khudyev, who has been a source of inspiration and encouragement to all those who come in contact with him. I was thrilled by this exuberant and precise music, its dedicated Conductor and the support of parents, grandparents, and friends in the audience. I will […] 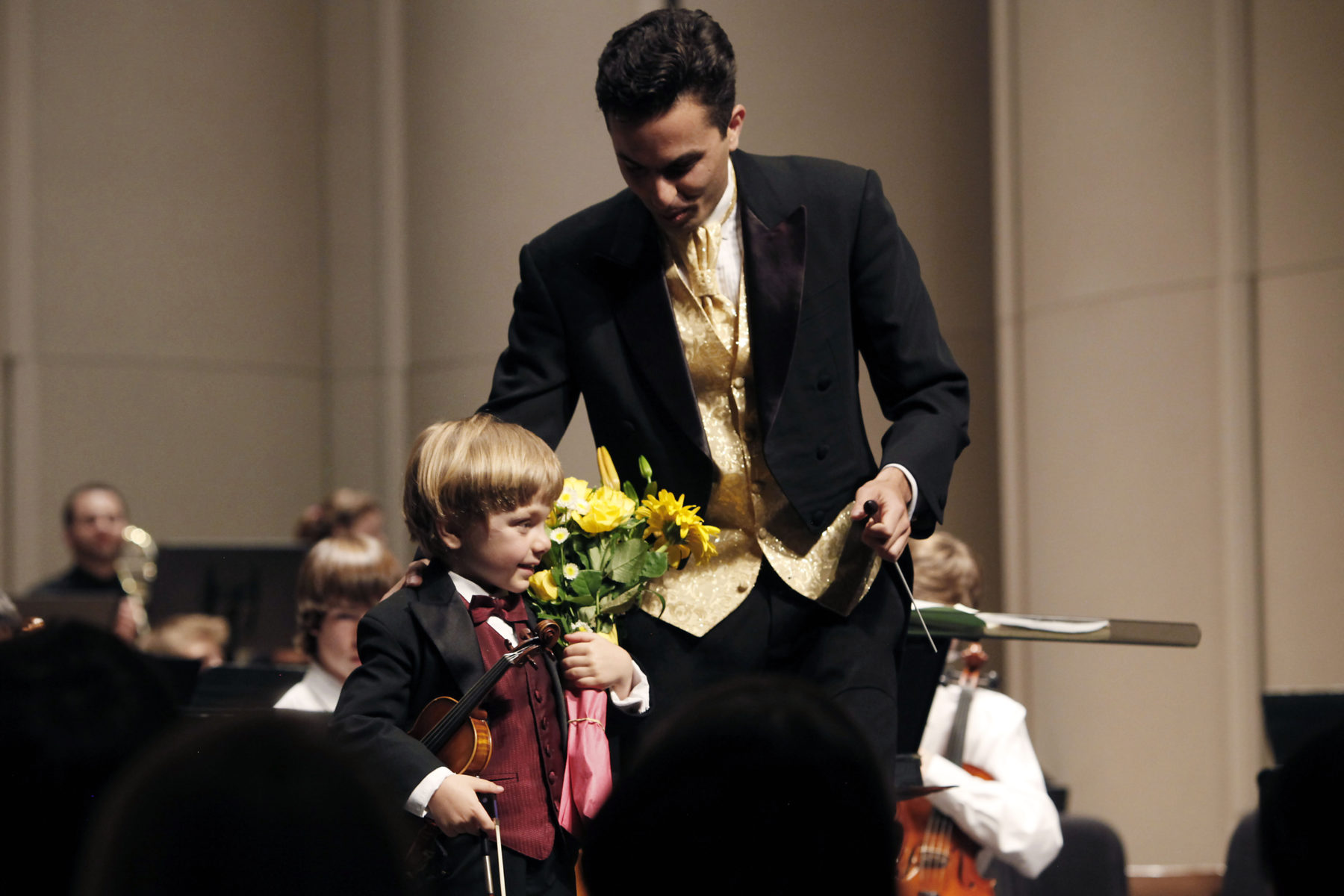 “Music Director Khudyev has to be admired, not only for his musical skills (and he is as accomplished as a violinist as he is as a conductor), but also for his skill in finding increasing support in the community…”

“By any standard, these young musicians played with great enthusiasm and surprisingly advanced skills. The final work on the program, a performance of Beethoven’s Fifth Symphony, brought the house down with thundering applause and a standing ovation for the young musicians. It is a great tribute to our community that YMMC, now in its 25th […] 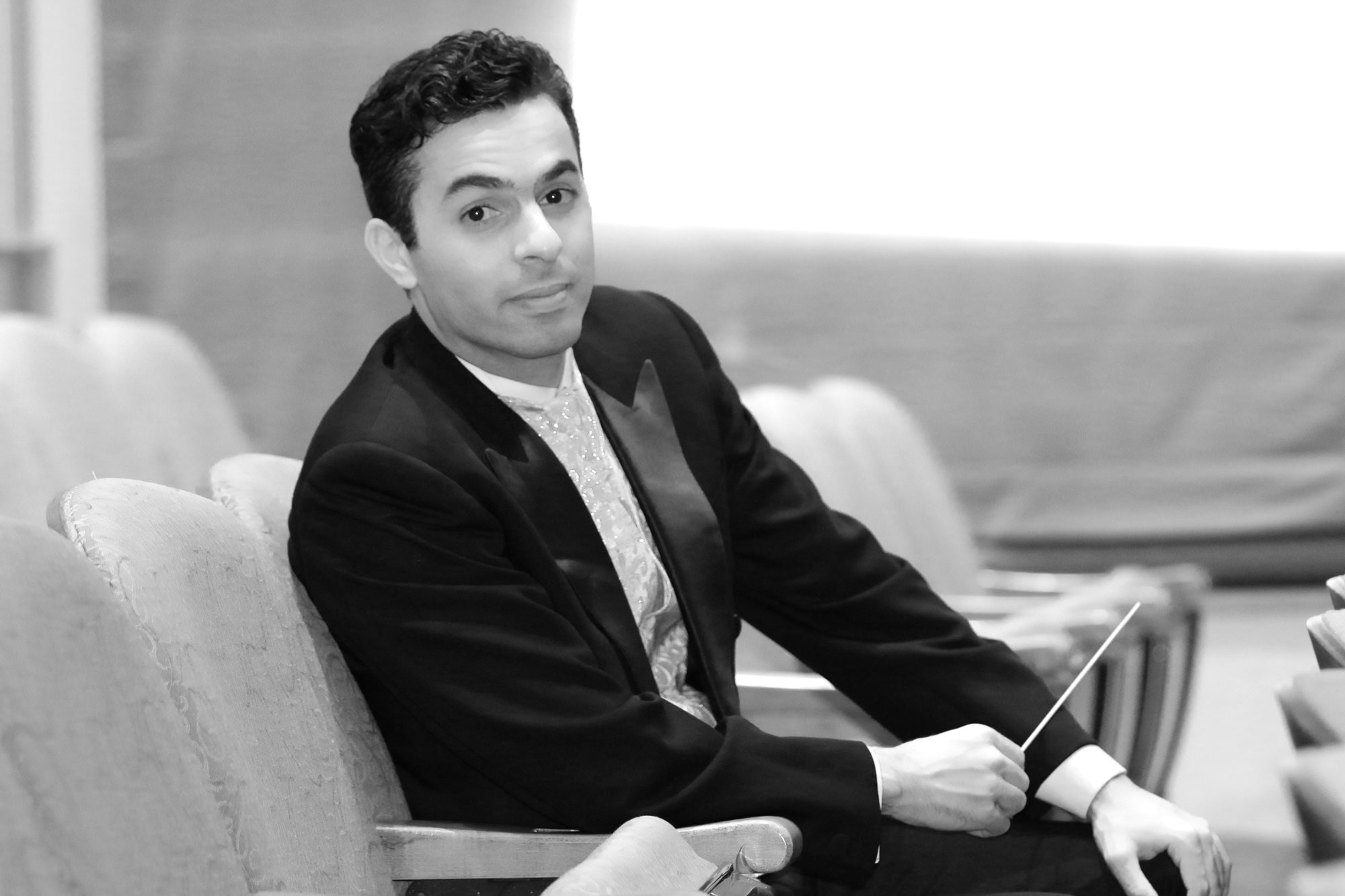 “Farkhad Khudyev has made an indelible mark in Monterey County.” 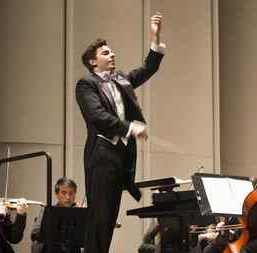 “He clearly was on his game and the young musicians played with unequivocal confidence.” Link to Article 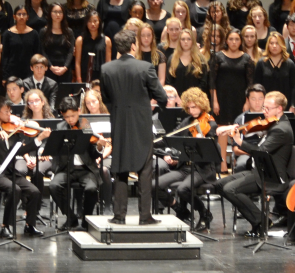 “The Finale to La bohème’s Act I was so full of poignant dramatic emotion it bought tears to the eyes of many a listener. This was glorious singing.” Link to Article 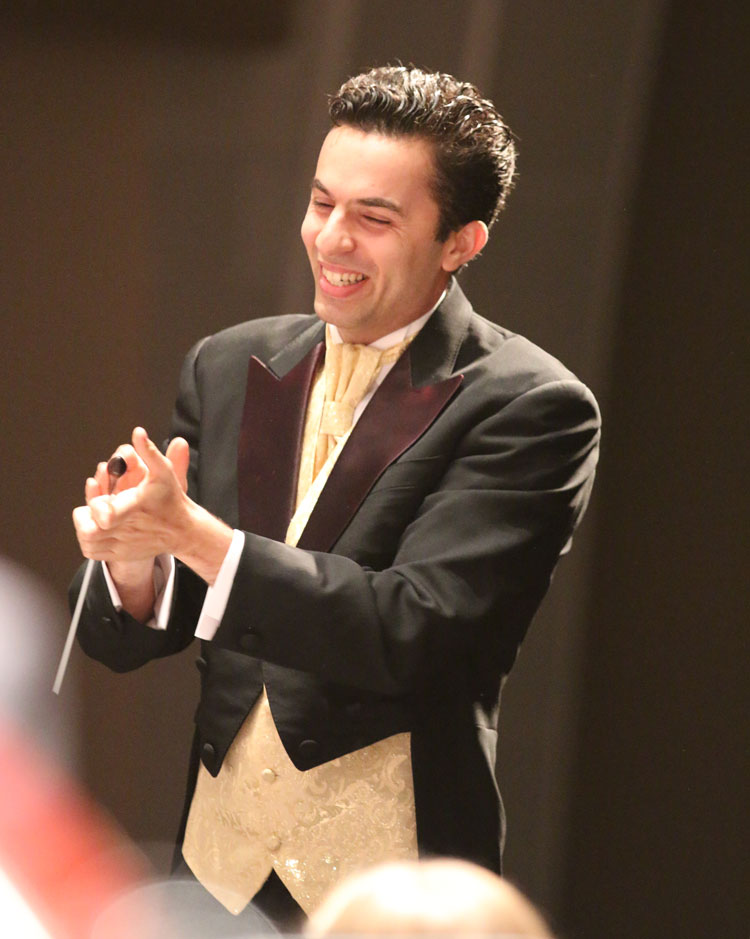 “The artist the community has already found him to be, a man of exceptional talent and charisma.”

“Khudyev chose them for that purpose then displayed his own artistic magic in shaping and pacing the students through their tricky parts. For the Junior group he was as much teacher as conductor. For the Honors, he was fully the artist the community has already found him to be, a man of exceptional talent and […] 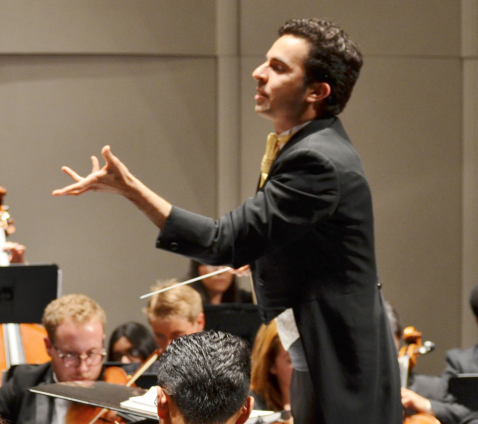 “There were several aspects of this concert that made it an especially memorable evening, but certainly at the top of the list was the presence of Farkhad Khudyev as guest conductor and composer of a new work, “The Sounds of Eternity,” commissioned by the Monterey Symphony to commemorate its 70th anniversary. The premiere of this […] 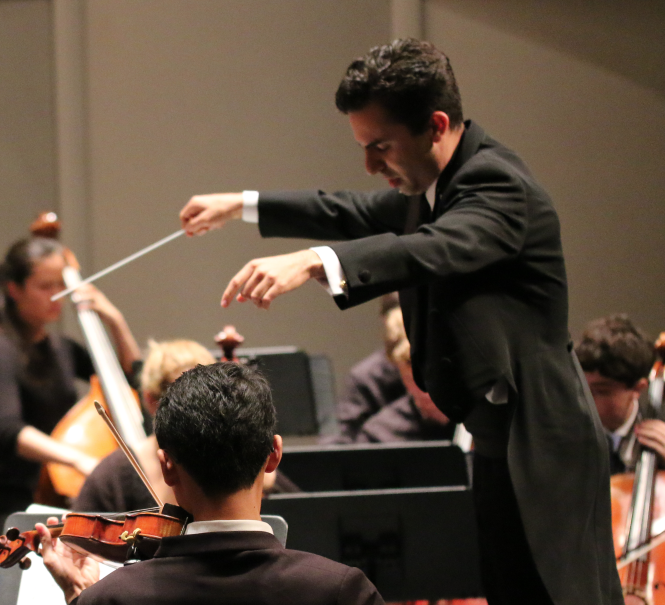 “One of the great surprises on the program was “The Enchanted Lake” by Anatoly Lyadov, which I was hearing for the first time. What a beautiful and mysterious tone poem this is — full of quiet magical colors and intense post romanticism that may have influenced Rachmaninoff’s “Isle of the Dead.” The Youth Honors Orchestra […]