“There were several aspects of this concert that made it an especially memorable evening, but certainly at the top of the list was the presence of Farkhad Khudyev as guest conductor and composer of a new work, “The Sounds of Eternity,” commissioned by the Monterey Symphony to commemorate its 70th anniversary. The premiere of this two movement, 11-minute work made a very favorable impression as it combined contemporary compositional styles, rhythmic vitality, effective scoring for orchestra with a few imbedded themes and ethnic elements from Turkmenistan. Underlying it all were some lovely long, and occasionally dark melodies that reflect the Russian modal and liturgical traditions that so characterized Russian music (especially Rachmaninoff) in the late nineteenth century. When this work concluded, I was sorry that it was over, for I wanted it to continue. I look forward to hearing it again during the rebroadcast on KUSP on March 6.”

“After intermission the program ended with an exciting performance of Beethoven’s Symphony No. 7. As often as we hear this great symphony, it is always a welcome guest, and Farkhad left his imprint on it with a richly detailed performance (and the fastest Presto movement I have ever heard). This was our first opportunity to hear Farkhad as a guest conductor — we hope it won’t be the last. His skill as a conductor was especially noticeable in the Mozart Concerto, where instead of a small chamber orchestra of the size Mozart would have expected, we observed a full orchestra on stage, yet Farkhad controlled the ensemble so that it never overpowered the soloist.” 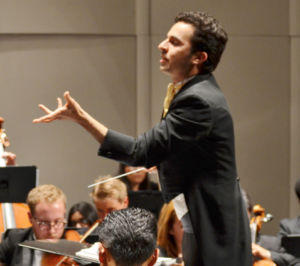